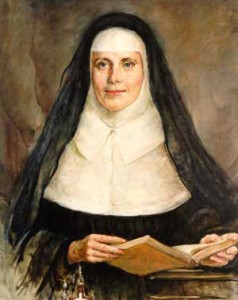 Catherine McAuley was born in North Dublin in 1778. Following the death of her father in 1783, life for her became difficult both economically and socially. As a teenager she nursed her mother through a prolonged illness until she died. After that, economic circumstances necessitated moving from one relative to another in order to have a roof over her head. Sometimes this meant being separated from her brother and sister.

In 1803, Mr and Mrs William Callaghan, a wealthy childless couple adopted her. She moved with them to live in Coolock in the outskirts of Dublin. While she was living with them she commenced her mission of mercy to the neighbouring poor and sick. In addition she nursed Mrs. Callaghan through a lengthy illness until she died in 1819 and subsequently nursed Mr Callaghan before his death in 1822. The Callaghan estate was left to Catherine McAuley and she used it to fund her building development in Baggot Street for the care of the poor and socially disadvantaged. In 1831 she founded the Sisters of Mercy, a Religious Congregation largely involved in the care of the poor, the sick and educationally disadvantaged. In the early days her work was mostly among the people of Dublin, but in time the Congregation spread and became one of the largest Congregations of women, not alone in Ireland, but in the world.

Catherine McAuley was a woman of great vision. She was an innovator in what she did, but also in how she did things. The care of the sick was always close to her heart and so in 1832, when an outbreak of cholera in Dublin was claiming hundreds of lives and people fled in fear of succumbing to the disease, she organised a team of Sisters to care for the sick at an improvised hospital in Townsend Street.

Her life as a Sister of Mercy only spanned ten years. In that time she worked tirelessly to respond to the need of the poor and sick. She set up a number of foundations for this purpose both in Ireland and England and was about to make her first foundation in Newfoundland when illness overtook her. She died in 1841.

She was a woman of prayer and of deep faith. Her philosophy was “Let us take one day only in the hands at a time, merely making a resolve for tomorrow. Thus we may hope to go on, taking short, careful steps, not great strides … Each day is a step we take towards Eternity … The final step will bring us into the presence of God”